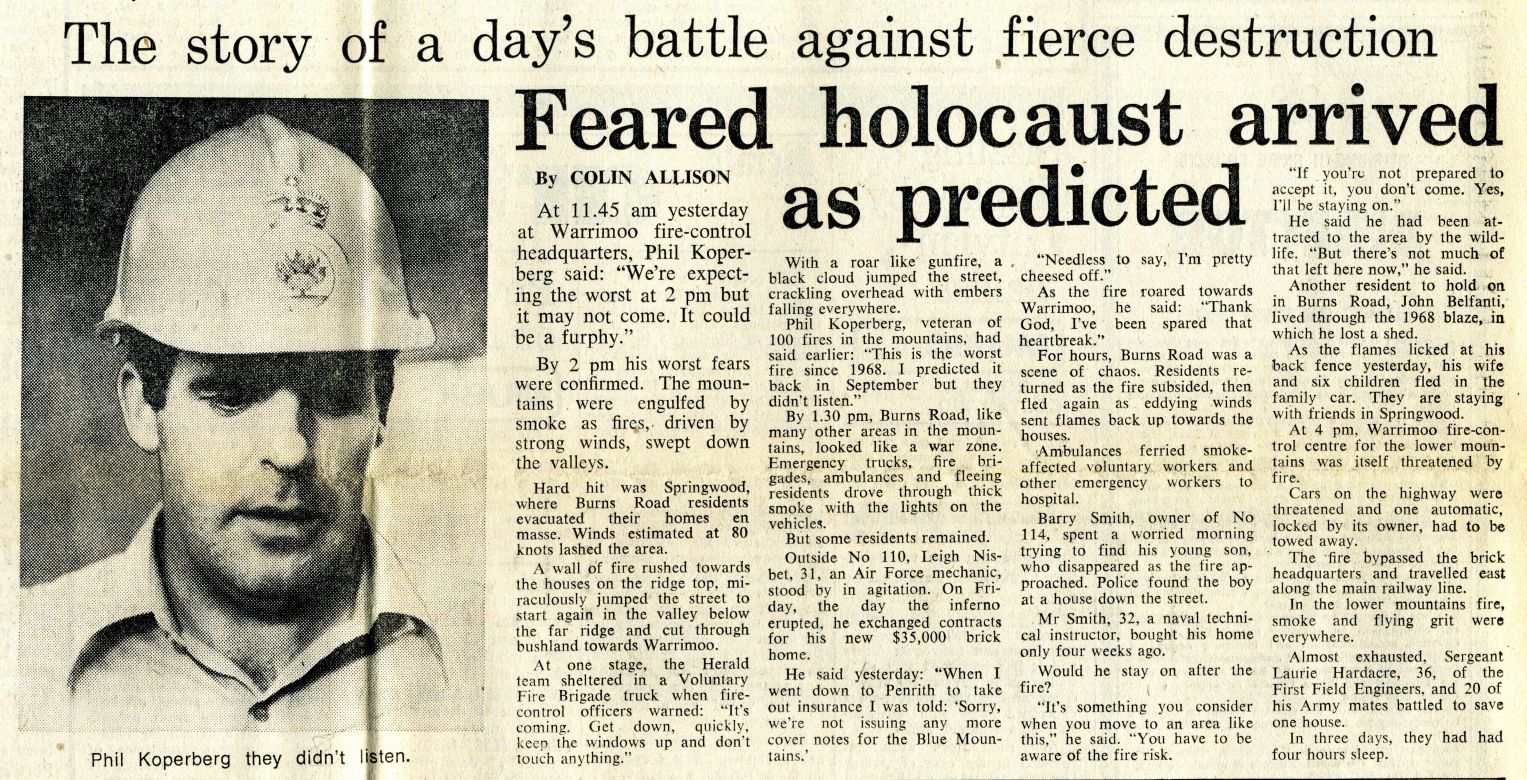 The story of a day's battle against fierce destruction

At 11.45 am yesterday at Warrimoo fire-control headquarters, Phil Koperberg said: "We're expecting the worst at 2 pm but it may not come. It could be a furphy."

By 2 pm his worst fears were confirmed. The mountains were engulfed by smoke as fires, driven by strong winds, swept down the valleys.

A wall of fire rushed towards the houses on the ridge top, miraculously jumped the street to start agin in the valley below the far ridge and cut through bushland towards Warrimoo.

At one stage, the Herald team sheltered in a Voluntary Fire Brigade truck when fire-control officers warned: "It's coming. Get down, quickly, keep the windows up and don't touch anything."

With a roar like gunfire, a black cloud jumped the street, crackling overhead with embers falling everywhere.

Phil Koperberg, veteran off 100 fires in the mountains, had said earlier: "This is the worst fire since 1968. I predicted it back in September but they didn't listen."

By 1.30 pm, Burns Road, like many other areas in the mountains, looked like a war zone. Emergency trucks, fire brigades, ambulances and fleeing residents drove through thick smoke with te lights on the vehicles.

But some residents remianed. Outside No 110, Leigh Nisbet, 31, an Air Force mechanic, stood by in agitation. On Friday, the day the inferno errupted, he exchanged contracts for his new $35,000 brick home.

He said yesterday: "When I went down to Penrith to take out insurance I was told: 'Sorry, we're not issuing any more cover notes for the Blue Mountains.'

As the fire roared towards Warrimoo, he said: "Thank God, I've been spared that heartbreak."

For hours, Burns Road was a scene of chaos. Residents retuned as the fire subsided, then fled again as eddying winds sent flames back up towards the houses.

Barry Smith, owner of No 114, spent a worried morning trying to find his young son, who disappeared as the fire approached. Police found the boy at a house down the street.

Mr Smith, 32, a naval technical instructor, bought his home only four weeks ago.

Would he stay on after the fire?

"It's something you consider when you move to an area like this," he said. "You have to be aware of the fire risk."

"If you're not prepared to accept it, you don't come. Yes, I'll be staying on."

He said he had been attracted to the area by the wildlife. "But there's not much of that left here now," he said.

Another resident to hold o in Burns Road, John Belfanti, lived through the 1968 blaze, in which he lost a shed.

As the flames licked at his back fence yesterday, his wife and six children fled in the family car. They are staying with friends in Springwood.

At 4 pm, Warrimoo fire-control centre for the lower mountains was itself threatened by fire.

Cars on the highway were threatened and one automatic, locked by its owner, had to be towed away.

The fire bypassed the brick headquarters and travelled east along the main railway line.

On the lower mountains fire, smoke and flying grit were everywhere.

Almost exhausted, Sergeant Lauire Haedacre, 36, of the First Field Engineers, and 20 of his Army mates battled to save one house.

In three days they had had four hours sleep.