Courage under fire in Lithgow

IT was like hell on earth for Rural Fire Service volunteer Ian Sutherland when he was fighting the bushfire in Lithgow, he turned around and it had sparked up behind him and to his left and right.

The Canobolas Zone volunteer was one of 16 firefighters from the region who were sent to lend a hand during the week as the Blue Mountains fires raged and destroyed nearly 200 homes. 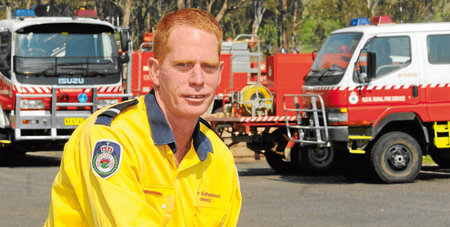 He said it was almost impossible to keep up with ember attacks as bits of floating, blazing debris started spot fires all around them but he trusted his crew and trusted everyone would make it out safely.

He said it was the worst bushfire he had seen in his seven year career as a volunteer and he had been to "countless" bushfires previously.

"I wasn't scared, we knew what we were doing but it was bad," he said.

"The wind was just up all over the place."

Mr Sutherland had to contend with wind speeds of about 90km/h as he fought to protect properties near Clarence and the Zig Zag Railway at Lithgow.

As far as he is aware his team lost no properties while they battled the fire.

He recounted driving through the ruined streets and making instant decisions on where they could help and which areas were too far gone.

Even though he was on holidays, he had no second thoughts about heading out on Thursday because that is why he joined up to the service.

"To help the community and to help out in times just like these," he said.

Canobolas Zone fire mitigation officer Geoff Selwood said he had absolute faith in the volunteers who were sent to help.

"We train them so they know where it is dangerous and where it is not and they know by instinct when to get the hell out of there," Mr Selwood said.

"If a firefighter gets caught it is because of an instant weather change."

Mr Sutherland said there were a few touch and go moments where they did consider getting the hell out of there.

Especially when the sky planes were grounded because the wind was too strong.

Mr Sutherland said despite the fire being the worst he had ever seen he would go back in a second if he was needed.

The Canobolas Zone was expecting to replace about eight volunteers yesterday but our own area would still be fully operational to respond if a fire broke out in the region.

There are about 2200 volunteers in Canobolas Zone.

The Orange NSW Fire and Rescue station sent one crew of four and a truck.