Beating back the bushfire: how the RFS tamed the Mount Canobolas fire

Four days of gruelling 12-hour shifts, back-burning during the day and assistance from aircraft – Rural Fire Service Canobolas Zone has revealed just what went into combatting the Mount Canobolas blaze in February.

Speaking at a town hall meeting in Nashdale on Saturday, Canobolas Zone manager Superindendant David Hoadley said he was immensely proud of the effort over 30 crews put into fighting the fire.

It hadn’t been an easy Friday night or Saturday for the Canobolas Zone Rural Fire Service. 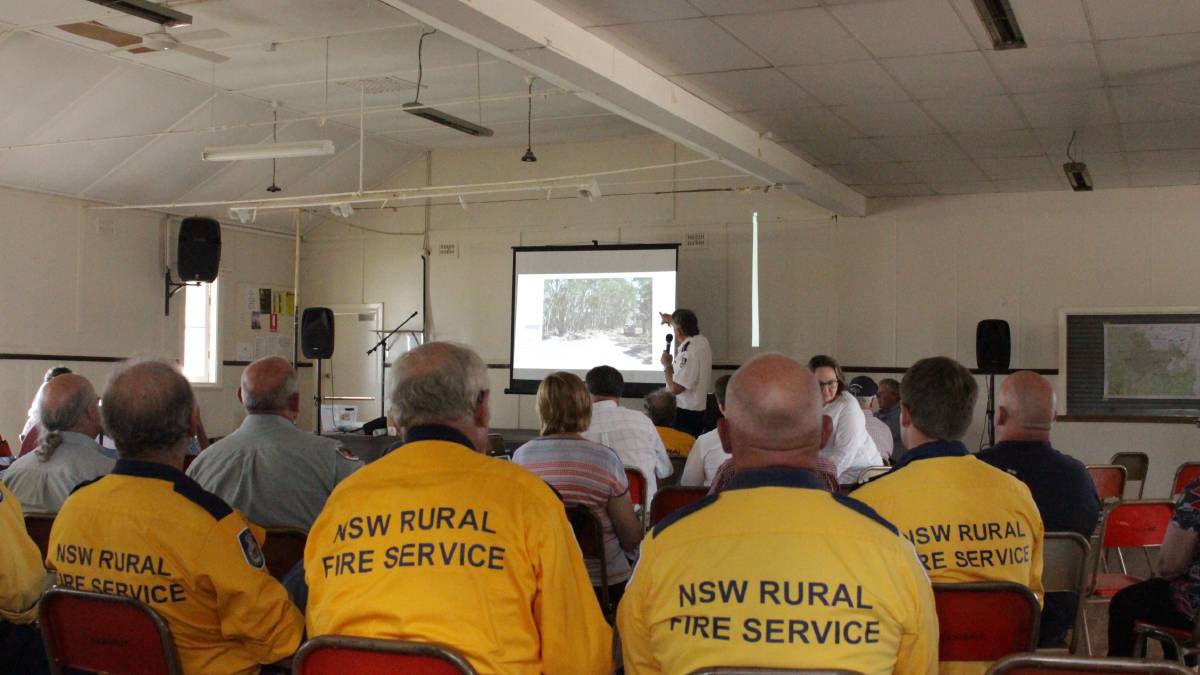 Brigades had spent the day at one fire west of Molong in Gumble, and another in the far north-east of Cabonne near Hill End on the Macquarie River.

At 7.45pm on the night of Saturday, February 10, the RFS was alerted to a fire starting halfway up the west slope of Mount Canobolas, just off the road.

Speaking at a town hall meeting in Nashdale on Saturday, RFS Canobolas Zone manager Superindendant David Hoadley spoke about how the RFS combated February’s blaze, which burnt over 1500 hectares.

“Brigades were at the fire very promptly, when we got to the fire it was something like 50 metres squared, and all of a sudden it exploded in front of their eyes and took off up the mountain.”

That blaze would be alight on Mount Canobolas for over four days, starting late on February 10 and finally burning out on February 14.

Thanks to the efforts of more than 20 RFS ground crews, close to a dozen firefighting aircraft and assistance from State Forest crews and NSW Parks and Wildlife Services.

No lives or homes were lost, but over 70 per cent of the mountain was burnt and several residents near the blaze lost fences.

Telecommunication equipment at the top of Mount Canobolas was also protected from fire.

“All of a sudden [the fire] exploded in front of their eyes and took off up the mountain”, Superindendant David Hoadley

Supt Hoadley said the first 24 hours of the blaze the RFS was “completely focused” on protecting property. 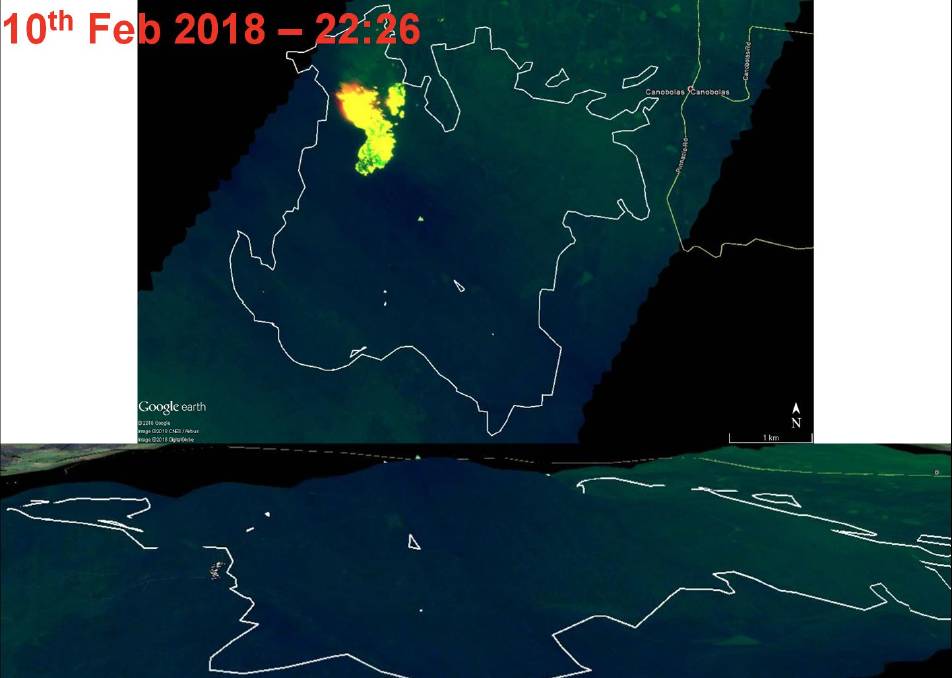 “During that time time warnings were issued to the public that conditions were dangerous and they should consider leaving their property, and a number of residents chose to do so,” he said.

RFS Canobolas Zone operations coordinator Brett Bowden talked the community through the fire with satellite thermal images the RFS used during the blaze respond to the fire.

The fire had raged overnight, with RFS unable to get close to the fires and aircraft unable to fight the blaze at night. 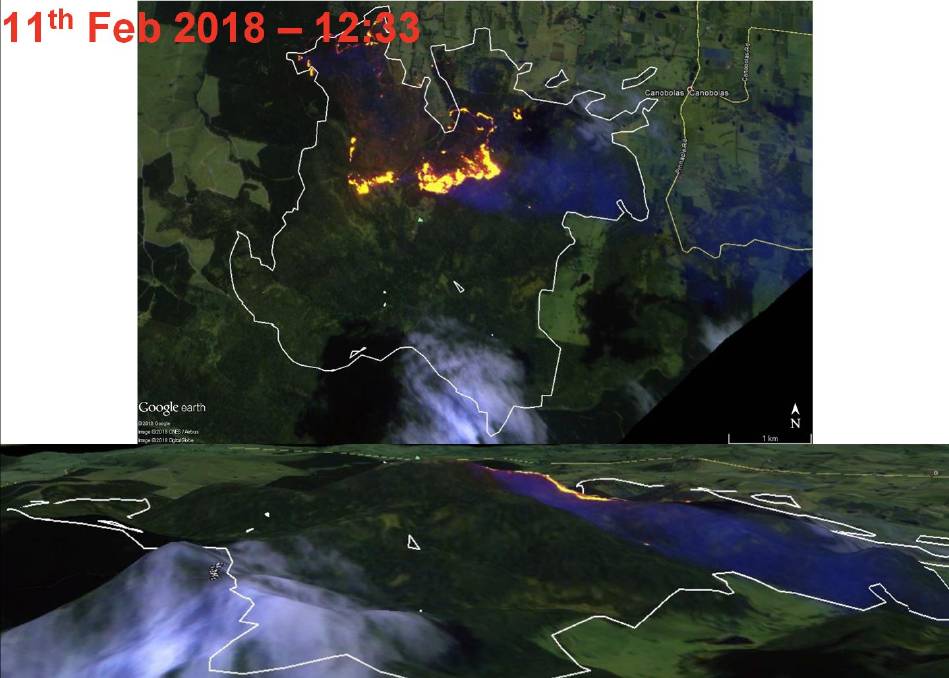 “You can see there it’s picked up intensity on both sides of the communications tower[image two], and less than half an hour later it’s progressed a little bit further, and on the bottom image it’s starting to come around to where we can see it,” Mr Bowden said.

During the afternoon there was a westerly wind influence and that started to push the fire around the north side of the mountain towards Lake Canobolas Road.

“At half past one the fire was progressing slowly and the intensity was being reduced by aircraft,” Bowden said.

“The Chinook was basically an 80,000 litre bucket, which makes a serious impact when it drops that load,” Brett Bowden

“They were dispatched to homes to make sure no homes were impacted by the fire.”

Getting access to the fire for tankers was too difficult, which left aircraft to do most of the work slowing the actual blaze.

“The Chinook was a great capability for us, it was basically an 80,000 litre bucket, which makes a serious impact when it drops that load,” he said.

Just after 1.30, the fire had taken a run for it and increased the intensity on the eastern side of the fire, with a couple of fingers licking over the top of the north-eastern ridge of the mountain.

Over the next three hours the fire progressed very close to Pinnacle Road and picked up intensity.

“The people around Lake Canobolas road would have known all about that [intensity],” Mr Bowden said.

“All the firefighting efforts by our crews were about property protection at that time. There was no capability whatsoever to do anything about suppression anyway.”

However, aircraft managed to get the fire under control and it turned north. At about 5.00 on the Sunday there were a large number of spot fires breaking out.

Mr Bowden said crew action was “swift” so the fire “didn’t get into larger areas” and head up Lake Canobolas Road and Towac Valley. 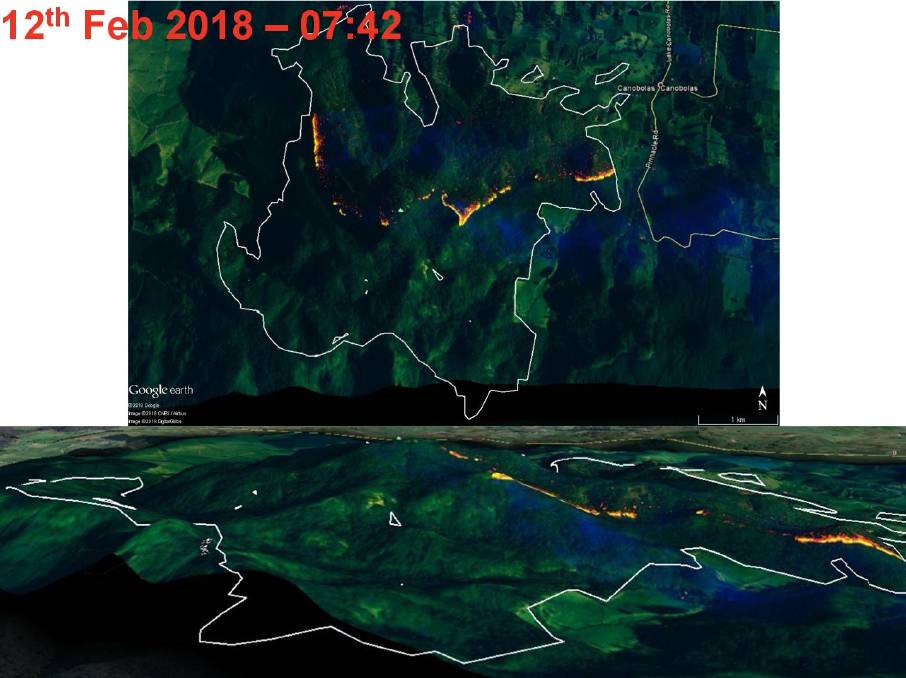 Thermal imagine on the Monday morning showed the fire had dropped down to three thin lines – one on the eastern side which would soon burn out, one heading south and one line of fire on the western edge of the mountain.

A fire had raged in the far north-west corner of the white outline of the mountain overnight, but had burnt itself out thanks to RFS preparation.

While the fire remained calm over Monday morning and into the early afternoon, it took a turn for the worse at the “witching hour” of 3.00, when the heat and wind picked up.

Moreover, conditions were due to worsen over coming days, and by Monday night the thin bands of fire from Monday morning had turned into full on fronts sweeping across the western side of the mountain heading west and south. 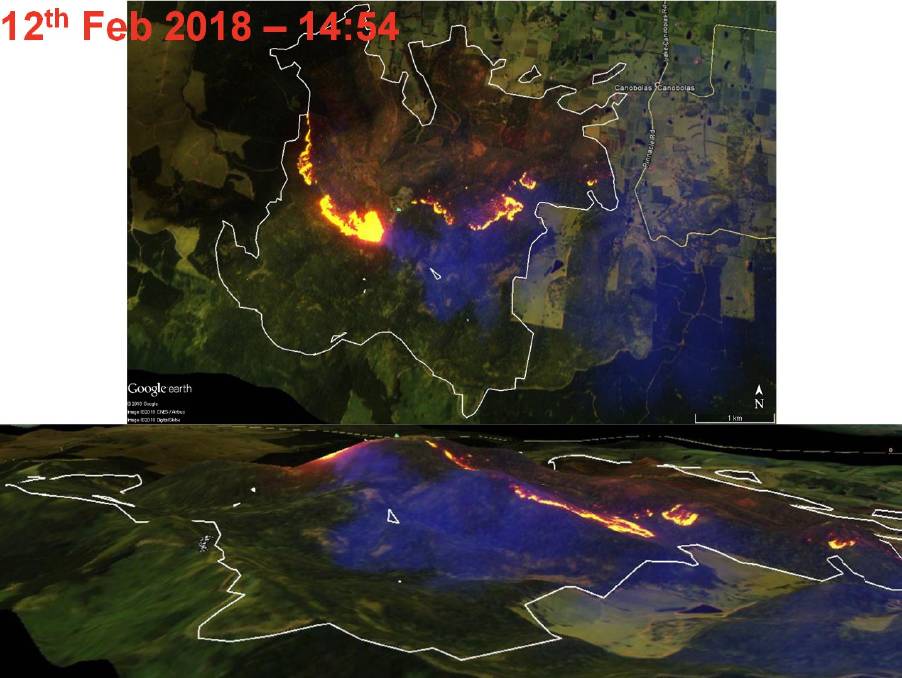 “At midnight on February 12 the southern edge of the fire is fully active and it’s in the range we physically can’t get at [with fire trucks], and because it’s night-time our aircraft can’t get at it,” Mr Bowden said.

So the RFS dug in. They began back-burning on the southern edge of the park, insistent on holding the line and preventing the fire from breaking into the state forest to the west.

“Our preparations were for the next morning where we were going to do about halting the southern progress of that fire and protect the equipment at the top of the mountain,” Mr Bowden said.

“The plan was to backburn the white line which goes into the state forest, this was going to be our containment line.

“We needed to muster a lot of troops to do that.”

But muster they did. The RFS – along with Park Rangers and State Forest crews back-burnt nearly 7.5 kilometres of containment lines that night, with the fire still coming towards them. 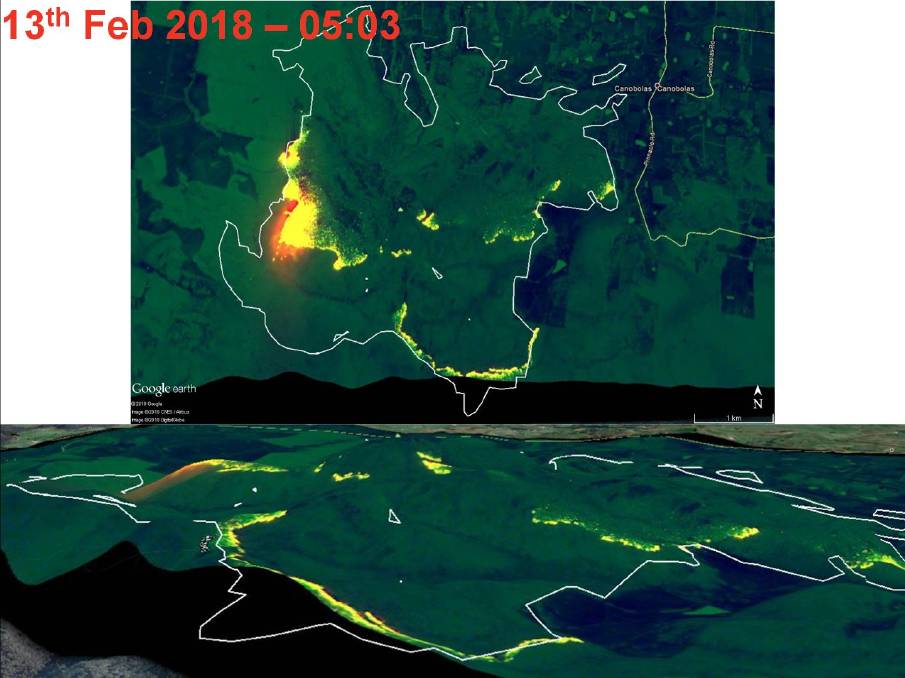 “You can see how hot it is right along that [western] edge there.”

“If we’d lost that fire along that state forest line the next day we’d have been out at Spring Hill and Spring Terrace, out near the airport.”

The preparation had paid off, with the fire not making the leap across the containment line.

However, the fire was still continuing to make haste as it headed south, and looked like it would break through the lines before night fell, meaning crews had to back-burn during the day.

Emergency services rarely back-burn during the day, as cooler temperatures at night make it easier to control the fire. However, in extreme cases there may be no other option.

This was one of those cases.

“It was imperative to contain that fire and we had no option but to continue that back-burn during the day which is not an ideal option, especially when you’ve got a fire that close,” Mr Bowden said.

“We had to try to get depth on that back-burn to stop the fire spreading.”

There was another danger. Conditions on Wednesday were set to take a turn for the worse as temperatures hit 36 degrees – so the fire had to be contained on Tuesday night. 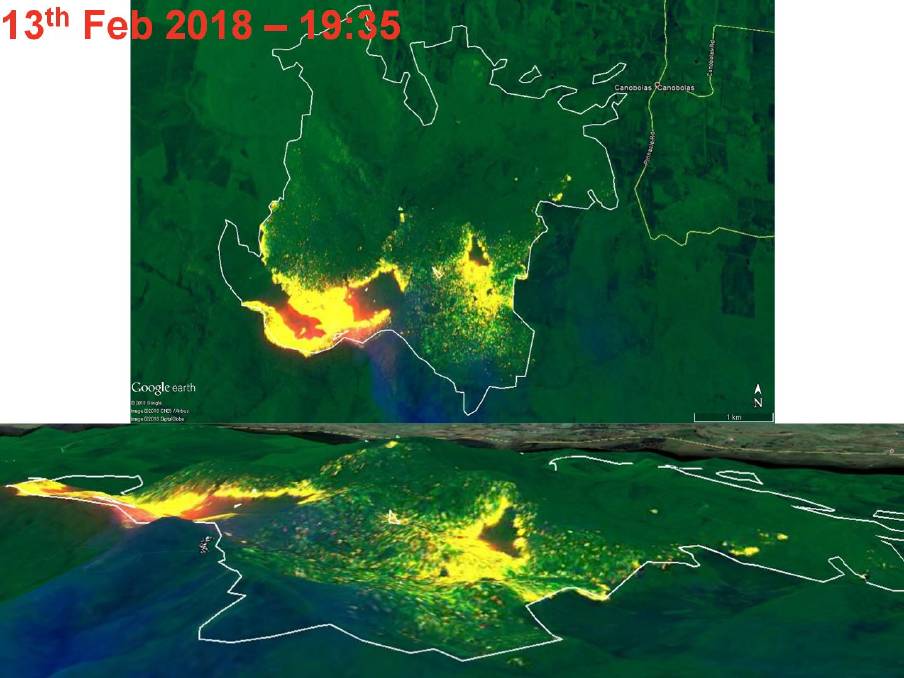 Thermal images of the fire show just how intense the front bearing down on the south-west corner of the mountain was.

Just after 7.00, the commander of the line decided to pull everyone out of the line as it was too dangerous to keep people in the bush without seriously risking loss of life.

“We pretty much held out breath hoping the fire stayed on that side of the line,” Mr Bowden said.

“In the next 15 minutes after this shot was taken the first stayed on the correct side of the track. We all took a breath, and we said thank god for that.”

The bulk of the fire burnt itself out overnight, with a few spots lingering in the east by 5am. Crews spent Wednesday back-burning and making sure the fire was under control, with the fire put out Thursday afternoon, with no loss of life or property despite over 1500 hectares of forest – 70 per cent of the mountain – being burnt. 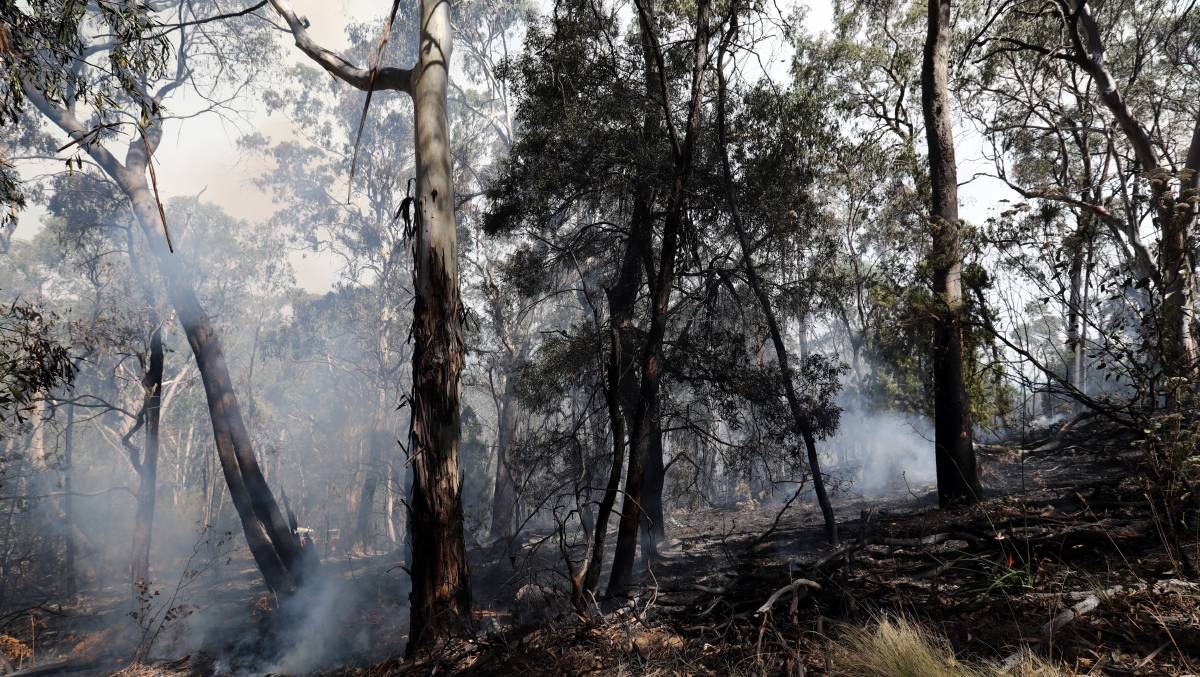 Supt Hoadley said it had been an “incredible” effort from all involved.

“All the agencies that supported us did a terrific job,” he said.

“That we were able to get through was significant effort, I haven’t seen the community come together like this in a very long time.”

The mountain is still blackened, and recovery is expected to take some time. NSW Parks and Wildlife Services report some grass is sprouting through, but there will be very little green on the mountain until spring.

Walking tracks are likely to remain closed for at least twelve months, and the road to the summit is closed indefinitely.