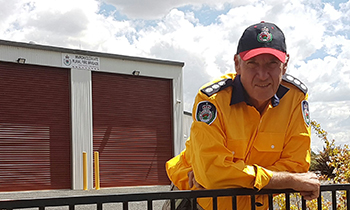 Mr Kjoller has been a dedicated member of the NSW Rural Fire Service since joining the Mullion Brigade as a teenager under the guidance of other family members. He transferred to the March Brigade in 1994.

He has attended numerous fires over his 50 years with the NSW RFS and has been involved with every major fire in the Canobolas District. He has gathered a wealth of skills and experience during his service and willingly imparts his extensive knowledge to all members through training and at incidents. He was instrumental in securing a new Brigade Station for the March Brigade which was officially opened in 2014.

Mr Kjoller is very tenacious in ensuring operational capability and especially so when it comes to the welfare and safety of all NSW RFS members and is a highly respected officer of the NSW RFS.