Congratulations to the eight NSW RFS recipients of the Australian Fire Service Medal, announced on the Queen's Birthday 2019. 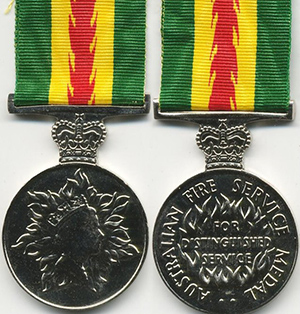 Mr Bagnell joined Castlereagh Bush Fire Brigade in 1975 where he has held the positions of Secretary/Treasurer, Training Officer, Senior Deputy Captain, Deputy Group Captain and Group Captain. He has also been Chairman of the Cumberland Zone Training Committee, and was accredited as a Bushfire Instructor. He was previously Chairman of the Cumberland branch of the Rural Fire Service Association (RFSA) and remains an active member of the association.

He has attended many fires within the Cumberland Zone and has led many strike teams throughout New South Wales as well as South Australia, Victoria, Western Australia and more recently to Queensland. He has also represented the NSW Rural Fire Service (NSW RFS) in the Northern Territory. His assignment in the Northern Territory involved assisting with the cleanup and erection of tents on Elcho Island in 2015 as the result of Cyclone Lam. His second visit was as Work Health and Safety Officer for the citrus canker eradication team.

He also led numerous storm damage strike teams in and around the state while assisting the State Emergency Service (SES). He has voluntarily project managed the construction of the Londonderry Rural Fire Station, the extensions to the Castlereagh, Llandilo, Berkshire Park and Wallacia Rural Fire Stations, alterations to the Cumberland Training Centre.

Mr Bagnell is known to have time for any volunteer who may have a problem, whether it is associated with the NSW RFS or a personal issue, and over his 45 year career with NSW RFS he has provided distinguished service to the people of New South Wales.

Mr Eade joined the Stuart Town Brigade in 1960 and has served with distinction over the past 59 years. In 1990 he was appointed Group Captain in the Wellington Council area, a position he still holds today.

He has attended many major fires in the district, and has assisted the NSW Rural Fire Service (NSW RFS) and his community as a Sector and Divisional Commander, Strike Team Leader at many major incidents.

As a young volunteer in December 1965, he attended a major fire which burned over 6,000 acres, destroying stock and much grazing country. In January 1975, he combatted a fire burning 22,000 acres and 11 rural properties including his own in the Stuart Town and Euchareena District. He has also served at major fires across the state including Snowy Mountains Cooma District, at the Blue Mountains Katoomba area in the early 2000's, as Divisional Commander at the Goonoo Fire Dubbo in 2006, which burned 126,000 ha, at Wallaby Rock Mudgee 2007, and at the Wuuluman Wellington District in 2017.

Over the years and the many incidents he has been involved in, he has shown strong leadership, dedication, commitment and support for the training and development of the volunteers producing results well above what is expected on and off the fire ground.

Mr Eade has also served as Chairman of the Orana Senior Management Team and assisted the neighbouring Cabonne Local Government Area in all types of incidents.

Mr Evans joined Headquarters Bushfire Brigade in 1980 and within the brigade structure, he has held numerous leadership positions for over 20 years, culminating in the election to the role of Group Captain in 2000, a position he currently holds.

His knowledge, skills and experience has proven invaluable in managing incidents within and outside the Sutherland Shire District. He has performed senior roles including Sector and Divisional Commander, Operation and Liaison Officer roles. As a Strike Team Leader, he has led the Sutherland Shire contingency and NSW Rural Fire Service (NSW RFS) Task Forces to many out of area fires including the Canberra Fires in 2003, to Victoria in 2009, and to South Australia in 2015.

He is also a highly valuable and dedicated member of the NSW RFS Sutherland Shire District Training Committee, and has been instructing and assessing the Bush Fire Fighter and Crew Leader courses for many years. He takes an active leadership role in the fostering and promotion of succession programs within the district, and provides mentorship for both operational and support roles.

He has demonstrated his energy, drive and enthusiasm for the organisation by representing the NSW RFS in many significant activities overseas, including to China, Botswana, Malaysia and Japan. He has also represented the Services' volunteer workforce on many panels and committees including the State Constitution Panel, the NSW RFS Occupational Health and Safety Panel, the NSW RFS Service Level Agreement Committee, and the Sutherland Shire Bush Fire Management Committee.

Mr Evans has demonstrated outstanding dedication, commitment, and leadership to the NSW RFS, its members, and to the community of New South Wales.

Group Captain Robert Field joined the NSW Rural Fire Service (NSW RFS) in December 1963 as a member of the then Jones Creek Bush Fire Brigade. Brigade amalgamations has seen him become a member of the North Gundagai Rural Fire Brigade. Group Captain Field has always remained an active member and supporter of the brigade and has held the positions of Brigade Captain, Brigade President and Brigade Training Officer.

In 2016 Gundagai brigades were transferred from the Riverina Highlands Zone to the South West Slopes Zone. Group Captain Field was instrumental in assisting NSW RFS staff and particularly volunteers to ensure this transition was seamless and least disruptive to volunteer culture and operational capacity. As a member of the Senior Management Team he worked tirelessly with the District Manager to ensure all concerns, management and operational issues were addressed and actioned where appropriate and then communicated to the volunteers in the Gundagai area.

Group Captain Field has always made himself available for an operational response, particularly during periods of high fire danger. His peers have said, "He is the little man that makes big things happen". Group Captain Field has demonstrated fireground leadership to the highest level, and is highly respected amongst volunteers.

Training and betterment of himself and volunteers has always been something Group Captain Field has supported. He has aspired brigades within his command to undertake regular training days and training courses to match the requirements of brigades and activities/incidents, they attend. He is a firm believer in imparting knowledge to others and is currently mentoring Deputy Group Captains to progress to the role of Group Captains as part of succession planning for field officers.

Group Captain Field’s commitment, dedication, and community service has been recognized through the awarding of the National Medal, 1st and 2nd Clasps, and Long Service Award for 35 years’ service to the NSW Rural Fire Service.

Mr Gately joined the Bruxner Park Brigade in August 1964 and has provided committed service to the NSW Rural Fire Service (NSW RFS) since that time. In 1992 he commenced in a leadership position as a Deputy Captain with the Bruxner Park Brigade before becoming the Brigade Captain in 1996. He has been a Group Captain since 2004 and a reliable leader of out of area strike teams.

He has faced many challenges and has continually shown strong dedication to the NSW RFS. He regularly responds to emergencies of all kinds at all times and beyond the Brigade he undertakes numerous functions in the district and is the President of the Rural Fire Service Association (RFSA) Branch.

He is still serving with the Mid North Coast Support Brigade, and is involved with community education, training, fire permits, the BFMC, the Fire Trail Working Group and fundraising.

He has been a driving force in training others and enhancing the chainsaw capability of the brigades and district. In addition, he was recently recognised as RFSA Member of the Year due to his continuous dedication as Chairperson of the Coffs Harbour Branch. Since 2004 he has also been a Permit Officer.

Mr Gately continues to use his skills and experience to promote important fire safety message and his 55 year career with the NSW RFS is evidence of his commitment to the safety of the community of NSW.

Mr Selwood joined the Springside Brigade in 1968 and in 1995 he was voted Group Captain for the Orange District, a role which he still holds today. In early 2000 he became a member of the Clifton Grove-Ophir Brigade and took on the role of Deputy Captain in 2002. In 2003, he joined the NSW RFS in the role of Fire Mitigation Officer and in 2008, he was elected as President and Treasurer.  He was instrumental in the Mount Canoblas fires in 1986 and was vital in efforts to establish containment lines which resulted in the control of the blaze.

He is passionate about community education and has spent many weekends attending local and out of area events, going to the farming community in the Clifton Grove district spreading the message for bushfire survival. He also regularly assists with training and is a great mentor to the Clifton Grove-Ophir Brigade's younger members. He holds an impressive list of fire related qualifications and willingly imparts his extensive knowledge to all members through training and at incidents and is in the process of establishing a Communications Unit for the Canobolas Zone.

He has also been a long time representative member on the local Bushfire Management Committee, Liaison Committee and Senior Management Team. As a keen amateur radio enthusiast, he assists the Canobolas Zone Brigades with maintenance of their paging receivers. He has conducted the First Aid program for several years and has taught First Aid to numerous volunteers.

Mr Selwood has also extended his knowledge of traditional burning, touring the Cape York area with local Indigenous people to learn more about this method of fire suppression and containment, and he has used the knowledge gained to assist local hazard reduction burns organised by the Indigenous community in Orange.

Mr Thatcher joined the Jellat Rural Fire Brigade in 1958 and over the ensuing 60 years he has been a pivotal member of the Brigade taking on several administrative and operational roles which culminated in his appointment as Captain in 2000.

He has been the backbone of the Jellat brigade for the past 19 years in his roles of either Captain, President or Vice-President. He has led the Brigade through major reform, focusing on developing the Brigade into the modern professional organisation that exists today, while ensuring the values, and lessons of the past are passed down to new members.

He has been instrumental in the mentoring of all members of the Brigade and in times when membership numbers are low, he goes above and beyond to recruit members who have the right skills, the right attitude, and fit in with the values and culture of the NSW Rural Fire Service. He is the public face of the Jellat Brigade, taking all opportunities to be involved in community engagement and awareness activities such as the Get Ready Weekend, Australia Day and ANZAC Day Activities. He is instrumental in all fundraising activities undertaken and his knowledge of the community, and his reputation within it, ensures that the Brigade maintains the ability to purchase new equipment and maintain the facilities.

The achievements of the Jellat Brigade over the past 60 years, particularly during the past 19 years, are in no small way due to Mr Thatcher's leadership and his dedication to the safety of the community of New South Wales.

Ms Walker has been a member of the NSW Rural Fire Service (NSW RFS) for 29 years. She commenced her service with the Huskisson Brigade in 1990 and was made a life member in 2000.

She has volunteered her time, skills and experience to the District Office, assisting staff with various tasks, requests and clerical administrative duties and her dedication and commitment are of the highest calibre.

She has been deployed on numerous major bush fires in the area and other emergency response incidents where she has fulfilled the role of logistical officer in incident management teams. She displays the highest standard of professionalism at all times and her enthusiasm is renowned amongst staff and volunteers alike.

She also works tirelessly promoting the reputation and image of the NSW RFS and is involved in a range of community engagement initiatives through her membership of the Community Engagement and Shoalhaven Catering teams.