Seven NSW Rural Fire Service members have been recognised this year for their commitment to the community as part of the Australia Day honours list 2021. 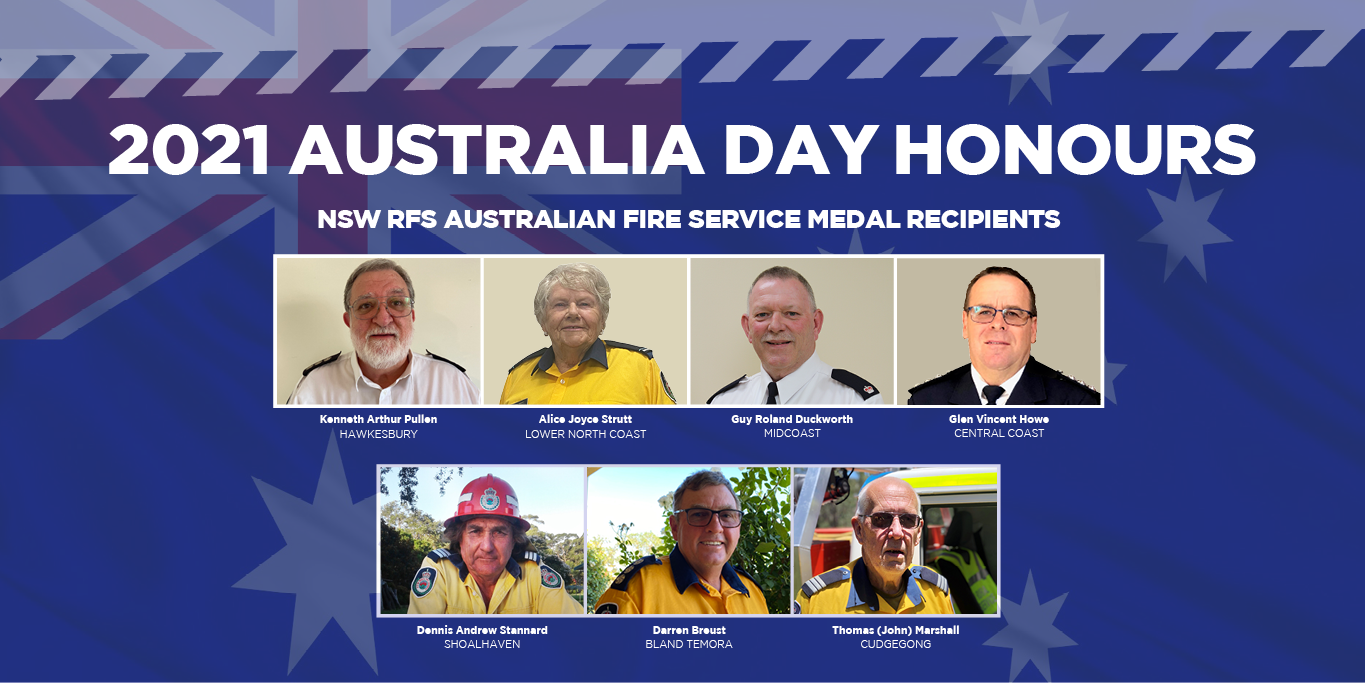 With his father, Group Captain Breust was actively involved in building the Tara-Bectric Brigade’s beloved 6x6 International fire tanker, which they housed on their property until it was decommissioned and replaced with a new Category 3 tanker.

The new tanker and the NSW RFS PMR radio/paging tower was also located on the family property until a new double bay brigade station was constructed and the communication equipment relocated.

On the fire ground Group Captain Breust is well respected and leads by example. He has an excellent work ethic and appreciation of the volunteer culture. When he responds to local incidents or out of area Section 44 deployments as a Strike team leader, Group Captain Breust has taken on such roles and responsibilities over and above that expected of him.

Group Captain Breust represents the Service in a respectful and inclusive manner.

He constantly works towards continues improvement and seeks clarification before contributing positive input to achieve the best results for our volunteers the NSW RFS and the wider community.

Inspector Guy Duckworth – Mid Coast, Area Hunter
Inspector Guy Duckworth joined the NSW RFS Davidson Bush Fire Brigade in the then Warringah/Pittwater District in January 1984. He transferred to the Belrose Brigade in August 1987 holding the positions of Deputy Captain, Senior Deputy Captain and Captain. He was then elected as a Deputy Group Captain in 1997 a position he held until moving to a salaried position with the NSW RFS.

In 1998 he was appointed to the rank of Inspector and Deputy Fire Control Officer for the Byron Shire Council. In 2000, Inspector Duckworth transferred to the position of Deputy Fire Control Officer for Port Macquarie Hastings Rural Fire District, which has evolved through zoning into the Mid Coast District where he is the 2IC and District Coordinator for Response Coordination and Infrastructure.

Inspector Duckworth has been an inspirational leader and mentor to the Brigade members in the District. His guidance and input to the Senior Management Team has been invaluable, consistently contributing to the strategic management plans that have formed and equipped the Brigades, taking it from the years of tanker trailer to the modern well equipped Brigades that serve the community today.

Inspector Duckworth’s operational experience is extensive and is one of the very few to have come all the way up through the ranks to his current position. He has been an Incident Controller and undertaken incident management positions all over Australia during fire emergencies. He is regarded as a very experience operator, leading strike teams into Canberra during the 2003 fires which ravaged the nation’s capital.

Inspector Duckworth is a dedicated leader in the NSW RFS since first joining in 1984. He has superior skills in leading personnel in a volunteer environment. He is totally dedicated to the goals of the NSW RFS and holds close the protection of the local community. He has been an advocate of the benefits of the volunteer community based fire services which is reflected in his dedication to the provision of fire protection to the community.

Inspector Guy Duckworth is a worthy recipient of the Australian Fire Service Medal.

Throughout his 42 years of service, Group Captain Howe has shown exceptional leadership skill in operations, brigade management, training and mentoring. He has assisted with numerous local significant incidents (mostly in an operational command role) including major bushfires of 1979, 1983, 1988, 1991, 1994, 2001, 2002 and 2019, and the 2007 and 2015 East Coast Lows, and the 1998 Newcastle Disease outbreak.

During the unprecedented events of the 2019/20 bushfire season, Group Captain Howe was an integral part of the effort to protect the Central Coast community. He led the forward operational response for the Three Mile fire to protect the communities of Kulnura, Mangrove and Spencer. During this response he commanded the field operations for 11 of the first 14 days that were the most critical in this response.

In addition to his outstanding service to the Central Coast community, Group Captain Howe has also taken a number of strike teams on out-of-area deployments for fires, floods and storms supporting many communities across NSW in their time of need.

Group Captain Howe has been a member of the District Senior Management Team for 27 years and has provided significant contribution to the strategic direction of the District. He has assisted with the leadership and direction during the local government amalgamations which is now known as the Central Coast District.

Group Captain Howe actively assists with the annual district program of training and hazard reduction burns as well as supporting numerous brigades in all areas of operational and administrative management.

Captain Thomas (John) Marshall – Cudgegong, Area Western
Captain John Marshall began his lifelong commitment to the community and emergency services in 1964 when he joined the NSW Fire Brigades at the age of 19. He remained with the organisation for 39 years where he held the position of Station Officer before retiring. In 1990 John also joined the NSW RFS Kurrajong Brigade, where he held the positions of Captain, Treasurer and President. Captain Marshall assisted in training the NSW State Emergency Service and NSW RFS in rope, caving and confined space rescue. He attended the Rescue Games in Canada and was part of the fire protection team at the 2000 Sydney Olympics.

During his time with the NSW Fire Brigades John helped to develop a water recycling valve for pumps known as the 'Marshall Valve’. In 2008, Captain Marshall moved the Rylstone area and joined the Bogee Brigade where he currently holds the position of Captain. The brigade has experienced a depletion in membership over recent years and without his continued determination for the brigade to retain a presence in the rural community the brigade would have been forced to fold. Despite his other commitments including wildlife rescue, he has been compelled to continue in the role of Captain and gives of his time generously to attend a range of incidents and carry out maintenance.

Over the years, Captain Marshall has attended a number of notable emergency incidents including the Thredbo Disaster, Black Saturday and Canberra Fires. Most recently he played a significant role in the Gospers Mountain and Kerry Ridge Fires. During the 2019/2020 season where at the age of 74 he daily led crews as Divisional Commander without absence for many weeks, withstanding the extreme weather and the unprecedented fire conditions. Captain Marshall successfully organised and implemented strategies that led to saving the lives, properties and livelihoods of the members of his local community. Despite the limited resources available to him, he continued to work tirelessly without grievance or fuss and was able to frequently execute crucial firefighting strategies with minimal time and resources. The professionalism and firefighting expertise demonstrated during this time was not surprising to those who know him, but his commitment and dedication continues to inspire those who are privileged to work alongside him.

Group Captain Kenneth Arthur Pullen – Hawkesbury, Area Greater Sydney
Group Captain Kenneth Pullen has been a member of the NSW RFS for more than 36 years, joining the Yarramundi Brigade in June 1984. He has served in the positions of President, Secretary, Deputy Captain, and Senior Deputy Captain and rose to the rank of Captain in 1990; a position he held for 12 years. He was made a Life Member of the Yarramundl Brigade in 2002 and received the Long Service medal and clasps for 30 years of service and has received the National Medal in 2004.

Captain Dennis Andrew Stannard – Shoalhaven, Area South Eastern
Captain Dennis Stannard has been an active member of the NSW RFS since joining the Sanctuary Point Brigade in1978. Throughout his period of service as both a volunteer and staff member, Captain Stannard has demonstrated exceptional leadership, commitment and achievement in many areas.

Through his time as a staff member, Captain Stannard played an integral role in the successful pilot program of Mitigation Support Services within the NSW RFS Shoalhaven District and was instrumental in the expansion of the State Mitigation Support Services (SMSS) model across the state. Commencing in 2008, Captain Stannard provided considerable leadership and mentorship during his 10 years with SMSS, including the formal implementation of heavy plant application in bushfire mitigation and the induction and training of new crew members and heavy plant operators.

Captain Stannard is a strong leader within the Shoalhaven District. Since joining the Wandandian Brigade in 1984, Captain Stannard has held leadership roles, such as Deputy Captain and Captain for a combined period of 17 years, His leadership capability also saw him elected to the role of Deputy Group and Group Officer In 2003, Captain Stannard received the Commissioner's Certificate of Commendation in recognition of his exemplary service during the 2001/2002 fire season.

Captain Stannard has also played an integral role in specialist chainsaw training. Captain Stannard has held the qualification of Fireline Tree Faller since 2001 and with his experience as a timber harvest contractor has been instrumental in the development of course content and the implementation of training of RFS Cross Cut, Intermediate and Fireline chainsaw operators in the District, Region and across the State.

Captain Stannard has also attended numerous incidents within the Shoalhaven District, and most recently, played a key role in the 2019/2020 Currowan Fire as a Heavy Plant Supervisor, Sector Commander and Divisional Commander. During this fire, Captain Stannard was instrumental in the protection of the Sussex lnlet, Cudmirrah, Jerrawangala and Wandandian areas. Captain Stannard also demonstrated exemplary courage and leadership on 31 December 2019, where he played a key field role in prioritising and deploying firefighting resources from all agencies into and within the Conjola area. Notably on this day, Captain Stannard selflessly entered an area being directly impacted by fire during catastrophic fire danger conditions and successfully rescued two firefighters from an overturned fire tanker.

Captain Stannard is well-respected by his peers and held in high regard in his community. He has demonstrated unrelenting exemplary service with the NSW RFS. His dedication, commitment and passion for the NSW RFS is depicted by his many achievements, community and service recognition.

Captain Dennis Stannard is a worthy recipient of the Australian Fire Service Medal.

When Captain Strutt arrived in Temagog in 1981, it wasn't the ‘done thing’ for women to fight fires. Not satisfied with just providing a support role to the local brigades, Captain Strutt was determined to show her capacity as a frontline firefighter. In 1990 she was one of the first women on the coast to complete the basic firefighter (BF) training, later to become a BF trainer for new members.

Captain Strutt has attended numerous bush and house fires, along with motor vehicle accidents on the challenging Kempsey-Armidale Road.

Captain Strutt has contributed to community engagement, assisting many of the smaller communities and schools in the upper Macleay.

During the 2019/2020 fires, Captain Strutt stayed on shift all night with the Communications Brigade, as the Carrai East fire was impacting the nearby Willawarrin community. With the main road closed west of Kempsey, she was unable to return home and chose to sleep in her car, before returning to the Fire Control Centre for her next shift. The following week the same fire impacted the Temagog area; the third time Captain Strutt’s property had experienced fire over the past 40 years.

Captain Strutt is a very talented and dedicated individual, having provided exceptional service to the local community over many years, and held in the highest regard by her peers.

Not only has Captain Strutt demonstrated commitment and leadership across a range of operational and support roles, she has proven to be a great ambassador for all female firefighters alike.

Captain Alice Strutt is a worthy recipient of the Australian Fire Service Medal.